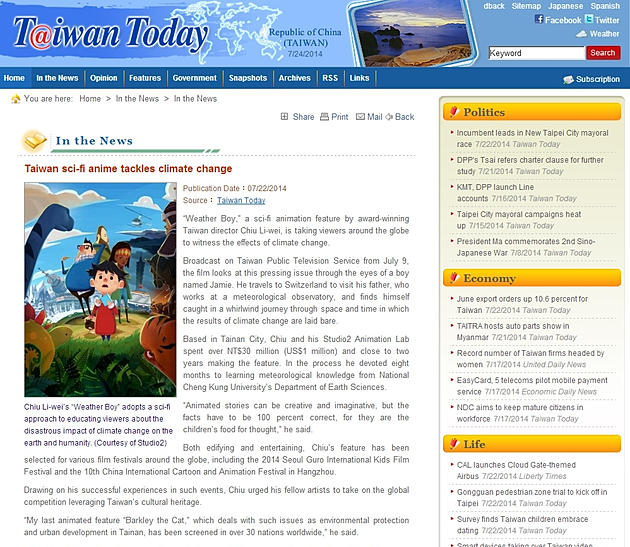 “Weather Boy,” a sci-fi animation feature by award-winning Taiwan director Chiu Li-wei, is taking viewers around the globe to witness the effects of climate change.

Broadcast on Taiwan Public Television Service from July 9, the film looks at this pressing issue through the eyes of a boy named Jamie. He travels to Switzerland to visit his father, who works at a meteorological observatory, and finds himself caught in a whirlwind journey through space and time in which the results of climate change are laid bare.

Based in Tainan City, Chiu and his Studio2 Animation Lab spent over NT$30 million (US$1 million) and close to two years making the feature. In the process he devoted eight months to learning meteorological knowledge from National Cheng Kung University’s Department of Earth Sciences.

“Animated stories can be creative and imaginative, but the facts have to be 100 percent correct, for they are the children’s food for thought,” he said.

Both edifying and entertaining, Chiu’s feature has been selected for various film festivals around the globe, including the 2014 Seoul Guro International Kids Film Festival and the 10th China International Cartoon and Animation Festival in Hangzhou.

Drawing on his successful experiences in such events, Chiu urged his fellow artists to take on the global competition leveraging Taiwan’s cultural heritage.

“My last animated feature “Barkley the Cat,” which deals with such issues as environmental protection and urban development in Tainan, has been screened in over 30 nations worldwide,” he said.

“Never be afraid to show who you really are. As long as the issue you address is universal, it will resonate around the world.” (YHC-JSM)